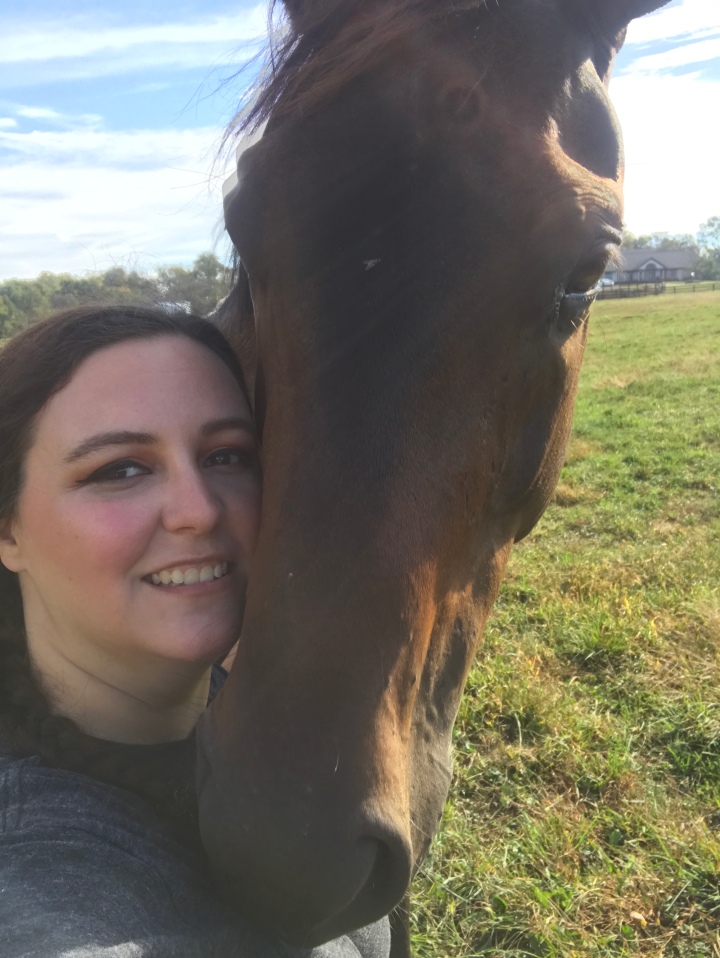 Today marks two years since I drove myself down to Lexington and made the biggest purchase of my adult life. Though we wound up no where near where I thought we’d be headed, buying Quinn was really the catalyst for so many important changes in my life. As heartbroken as I am that we’ll never meet the milestones I see so many of my peers accomplishing with their young horses, I have so much gratitude for this little bay gelding.

Prior to buying Quinn it had been around 8 years since I owned a horse. At 20 years old, I had struggled to work and go to school and pay for a horse on my own that time and circumstance rarely allowed me to see. When I finally gave my horse up I couldn’t foresee a future where horses would feasibly be a part of my life again. I thought the door had closed on being an equestrian forever, that that part of my identity would be boiled down into a bullet point of my personal history to be offered up as a fun fact during an icebreaker game.

Hi my name is Casey and I used to ride horses.

I soon found out that treating a part of myself that I had once held in such reverence as flippantly as the fact that my hair used to be blond was too painful, so I just stopped talking about it all together. I buried it so deep that people in my current life were a bit bewildered to find out that I had taken a Friday off from work to drive to Lexington and purchase a Thoroughbred. I had kept it largely to myself for nearly the year prior that I had returned to taking lessons. I didn’t want to explain the history or deal with the fallout if I had to give it up again. Like they had been in my childhood, horses were the one thing in my life that existed just for me.

Believe it or not, in spite of everything that’s happened since, buying Quinn marked the beginning of the end of a pretty dark phase of my life. On the surface everything was great. I was steadily finding success in my career, my husband and I had purchased our first house, we were going on great trips, and spending lots of quality time with our family and friends. I could have ticked nearly every box off a list of what people need in order to be happy but on the inside I was empty.

Depression has been a part of my life for as long as I can remember. I’m fortunate that for the most part it comes and goes quietly, allowing me to acknowledge its presence while still being able to function semi-normally in my daily life. During 2016-17 however, it swallowed me whole. I could see all of the good things in my life – things that I had worked hard for, things that I hadn’t always believed would even be possible, but it all felt meaningless. People would applaud my achievements and I would smile and thank them but on the inside I couldn’t make myself care about any of it even though I knew on some level that I should be proud. At first I thought it would subside but slowly I started sinking further and further until my husband started coming home from work to find me sitting in the living room in the dark, sometimes mindlessly scrolling on my phone and sometimes just staring into the void. I stopped cleaning the house. I stopped working out with my friends after work and started skipping family functions, attending the few that I did under much duress. I gave all of my work projects away. A coworker asked me privately if I was planning on quitting.

Yes, I thought to myself, but not in the way that you mean.

I had a moment of clarity shortly after this and realized how dire the situation had become. I got myself into therapy. It wasn’t easy, looking at the hard and scary parts of yourself never is, but after some time I started to function again. Through therapy I realized that while I had achieved so much and had so many things to be happy about and thankful for, there wasn’t a single thing in my life that I could point to that I was doing just for me.

As luck would have it, around this time my very first riding instructor reached out to let me know she had moved to a new facility and invited me to come check it out. I had received this invitation several times over the years and always declined, the idea of even visiting a barn still too painful to consider knowing that being an equestrian was a thing of my past. This time, with much encouraging from my therapist and my husband, I said yes and now the rest is history. It didn’t take long for me to be all in on horses again, I started looking for one within a few months of starting to take lessons again.

Owning Quinn has been one of the hardest and most challenging things I’ve ever done. I’ve spent 3/4s of the time I’ve owned him either trying to get him diagnosed or trying to rehab him from injury. There have been a lot of moments along the way that I thought would break me. I have questioned more than a handful of times why I even did this, why would I go back to horses when I KNEW that for every ounce of joy they bring an equal or greater amount of pain? Why did I fall in love with a horse that would mangle itself within 3 months of me owning it and then take over a year to find someone who could even figure out what was wrong with him? What was the point of all of this? The irony of having something I did to try and save myself go so horrifically wrong has not been lost on me. I have shook my fist at the universe and asked “Are you fucking kidding me?!” with alarming frequency.

Standing on the other side of it all now, though it’s taken some time to get here, I can see that Quinn actually did save me just not in the way that I thought he would. All of the pain and frustration and adversity was necessary to clear away the parts of myself that had kept me small. I had to go through it all to learn to believe in myself in the face of insurmountable challenge, to learn to filter out all of the noise and trust myself. I had to go through it to learn that fear didn’t have to paralyze me, that I’m so much smarter and braver and more capable than I ever thought I was. Quinn was a door I had to walk through in order to find myself again underneath all of the masks I wore for the rest of the world and the mountains of lies I told myself about myself.

He also just radiates joy. He’s one of those horses that to just be in his presence is to be happy. I used to love to sit and watch visitors in the barn because without fail they would be drawn to him. On my worst days, days that I don’t even want to go to the barn, I can hang out with him for a while and whatever I’m feeling will just dissipate. Though it didn’t happen at all like I planned, he’s made me better in every single way. A better horseman, a better person, a better me. I’ve gotten some raised eyebrows over the lengths that I went to in order to try and fix him and over the fact that I intend to keep him even though he’s only capable of being a pasture pet but those people don’t know what this horse has given me. He owes me nothing. He saved my life.